Notice, this page refers to the befriended version of Sproink, for the boss see here

This middle-aged Yo-kai loves hot baths and even sneaks into hot springs after hours. He turns red and snorts fire from his nose when he's been soaking too long.

A large pig yokai. He's pink and incredably fat, so fat that his big red belly button sticks out. He wears a yellow swim mask. He has a single purple spike onto of his head and thick purple lips. This tongue is green and always hanging out. He has floppy ears like a dog. He wears a grey towel tied around his shoulder and two wrist bands. He wears white boxers and a blue loin cloth with a bath symbol on it. He carries a wooden wash tub in each hand. 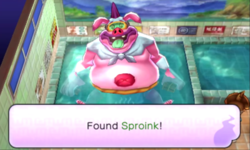 In Yo-kai Watch, you will find Sproink relaxing in the hot water during a story quest.

When disturbed from his bath, he becomes very angry. Otherwise he is fairly calm, as long as he is not bothered.

When Sproink bathes in a hot bath, the water becomes incredibly hot, so hot that most people become dizzy.

During your battle with Sproink, watch out for his Soultimate attack - Squealing Boil! 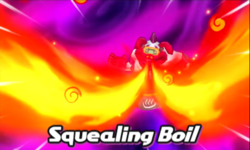 In Other Languages[edit | edit source]