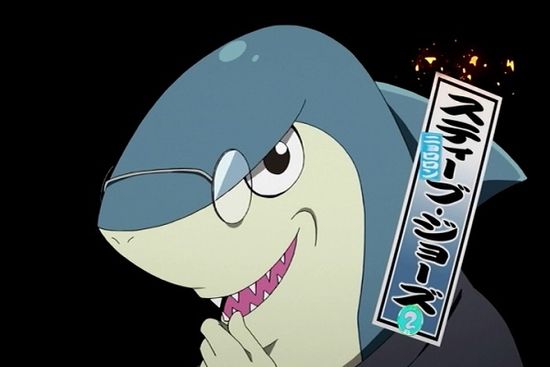 Steve Jaws first appears in EP027, where he showcases his latest gadget namely the Yo-Kai Watch Model Zero. This leads to a big sale in Yo-kai-lifornia, Yo-kai World.

He later makes a brief appearance in EP035, having been invited by Directator to star in the shark attack scene of his latest movie "Yo-kai Titanic".

In EP070, it is revealed that Hidabat comes in second behind Steve Jaws as the richest Yo-kai.

In EP078, he is revealed to have stepped down from being in charge of Yopple Inc. due to a controversy about the Yo-Kai Watch Model Zero (claiming to have been the one who built it when it was Nate's grandfather). He is succeeded by Mark Shachiberg.

In Yo-kai Watch 3, he has gone into hiding somewhere in North America and is the one who builds the Yo-Kai Watch Dream and its weapon modes.

Steve Jaws is a light blue shark wearing glasses, a black shirt, light blue pants, and shoes. After leaving his position as head of Yopple, he's taken to wearing a grey hoodie.

Not much is known about Steve Jaws' Yo-kai abilities, although he is likely to possess considerable technical expertise as the re-creator of the Yo-Kai Watch Model Zero. After leaving Yopple Inc., he developed the Yokai Watch Dream and all its peripheral devices.

As mentioned in his Yo-kai Medallium bio, The Jawsome Kid is related to "a certain well-known IT company president". However, he arbors a deep hatred towards Steve for being too focused on his job.