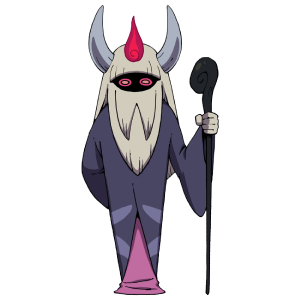 Wicked Tribe (カイマ族, Kaima-zoku?) is a special class introduced in Yo-kai Watch 2: Ganso and Honke. They are subdivided in three groups:

Although the player can get their Yo-kai medals -complete with their own summoning song-, they are unusable in battle until Yo-kai Watch 2: Shinuchi; after purifying Tokio Ubaune, the player can befriend the Wicked Executives around different buildings of Springdale and turn ten individuals of classic Yo-kai into their Wicked Servant counterparts by combining them with the Wicked Powder.

In the games and when playing with the toys, their chant is: Wicked, sticked! Who's calling Wicked? Icked, Wicked! (カーイマカーイマ!呼んだカーイマ?本当カーイマ!? Kāima Kāima! Yonda kā ima? Hontō kā ima!? "Kaima Kaima! Did you call us now? For real now!?").